Standing beside a rutted red dirt road at about 5,000 feet up in the jungled mountains of northern Rwanda, Intel’s Adam Schafer explains in four words why he and a teammate had traveled from Oregon to this especially remote part of Central Africa.

With banana trees swaying behind him, Schafer continues: “Our goal is to protect the people and the planet, both of which help us produce our products. We want to meet the responsible sourcing expectations of our customers, shareholders and employees.” 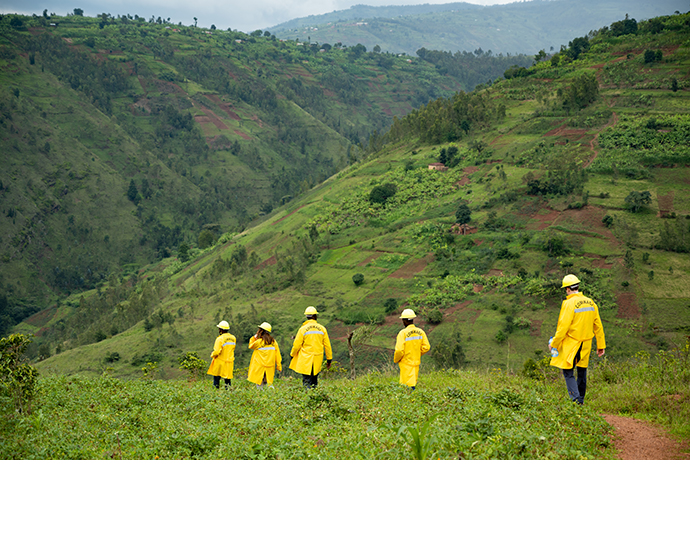 Why Rwanda? The minerals — tin, tantalum, tungsten and gold (known as 3TG) — that lie both deep underground and right on the surface in this part of Africa are essential to the worldwide silicon manufacturing industry.

In chip manufacturing, for example, tantalum is a metal uniquely well-suited as a diffusion barrier on advanced copper interconnects. In the assembly/test process, tin offers a low melting point and is a key component of the solder that attaches silicon chips to their packaging. Gold is corrosion-resistant and an excellent electrical conductor for the tiny pins that connect chips to other components.

On behalf of Intel, Schafer and Mitchell made the trip to fully understand the first part of a complex process. It begins with a chunk of mineral ore in Africa and — after passing through many hands, including miners, refiners, smelters and sellers, scattered across the globe — eventually winds up in chip factories. Ultimately, it turns up in your computer, your tablet, your smartphone, as well as in the millions of servers that run the internet and likely are delivering this story to you.

The Intel team’s fact-finding trip was completed before the coronavirus pandemic halted most air travel — but helped guide Intel’s recently announced 2030 Corporate Responsibility Goals as they relate to responsible sourcing.

In continued successful pursuit of Moore’s Law – as well as achieving these new 2030 goals – Intel recognizes this: Ethical mineral sourcing throughout the supply chain is no less important than process and technology innovation.

An effort that began with ‘conflict minerals’

More than 10 years ago, Intel recognized that some of its mineral purchases — through a complex web of supply chain intermediaries — were unintentionally contributing to human rights abuses in the Democratic Republic of Congo. Armed guerilla factions in that country were exploiting forced labor, often abusing children and women, and engaging in multiple human rights violations — all in pursuit of illicit profits from the global mineral trade. 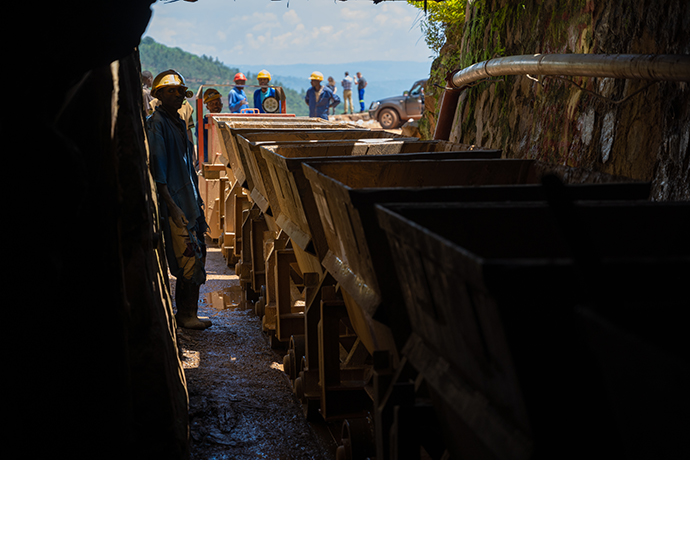 This is how the 3TG minerals — when extracted from the Earth under these abusive conditions — came to be called “conflict minerals.” The minerals themselves are not an issue.

At the time, Intel analyzed its supply chain and began a multiyear, industrywide effort to root out human rights abuses from the mineral components in its own products and those of other tech companies.

The 2010 U.S. Dodd-Frank Act, which Intel supported, required companies to disclose if any of their 3TG minerals are sourced from the Congo or neighboring countries. That was the same year the U.N. reported a grim statistic: In the Congo’s mineral-rich Kivu provinces, “almost every mining deposit was controlled by a military group.”

At the 2014 Consumer Electronics Show, then-Intel CEO Brian Krzanich announced on his keynote stage a milestone that took many observers by surprise. Going forward, all of the company’s new processors would be sourced from minerals that are “conflict-free.”

Other technology companies also joined the conflict-free effort, along with nongovernmental organizations, as part of the Responsible Minerals Initiative. 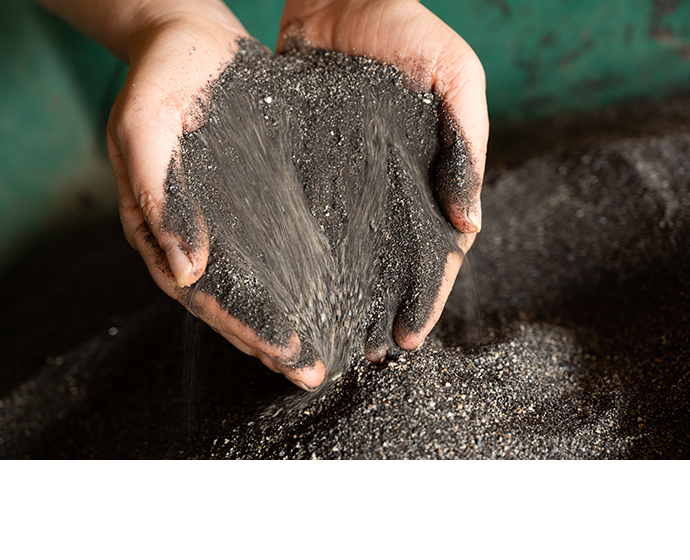 The International Peace Information Service reported that by 2016, 79% of miners in eastern Congo said they were working in mines where no armed groups were involved.

From conflict-free to responsible sourcing

Schafer and Mitchell’s mine scouting work last December in Rwanda — Schafer also visited mines in the Congo, and Mitchell visited smelters in India — was a sign that Intel, along with key tech industry leaders, are further raising the bar.

Intel and its partners are moving beyond the issue of conflict minerals to the broader and loftier goal of achieving “responsible sourcing.”

“Intel came off to a very strong start in the conflict minerals space, and we were a very early leader,” explains Mitchell during one mine visit. “We want to take that leadership we had early on and expand on it.” 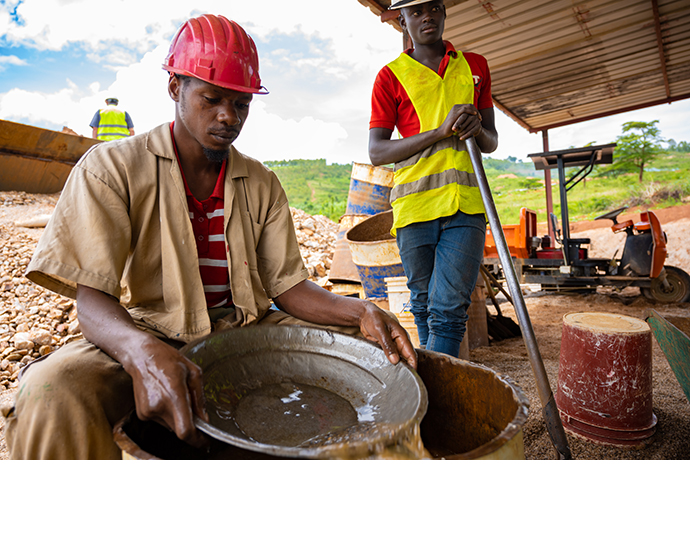 So now, Schafer and Mitchell, along with others across Intel’s global supply chain organization, are asking questions such as: Are mining conditions sustainable and ethical? Are miners’ human rights respected? Is the raw mineral ore that enters the supply chain carefully traced so that buyers can be assured it was mined and sold legally, free of human rights abuses?

Tracing minerals is not trivial

Schafer and Mitchell visited six mines and refining facilities over five days, heading out each morning from the capital city of Kigali with a local driver familiar with the bone-rattling unpaved mountain roads that snake up to most of the country’s underground mines.

At Rutongo Mines, the two stood at the entrance to a horizontal mine shaft as workers in black rubber boots and bright yellow hard hats emerged from the darkness, grinning at their visitors while muscling a narrow-gauge rail cart full of tin ore into the bright nearly equatorial sun. There, the Intel team learned that the mine operator is facing competition to his business of an odd kind. 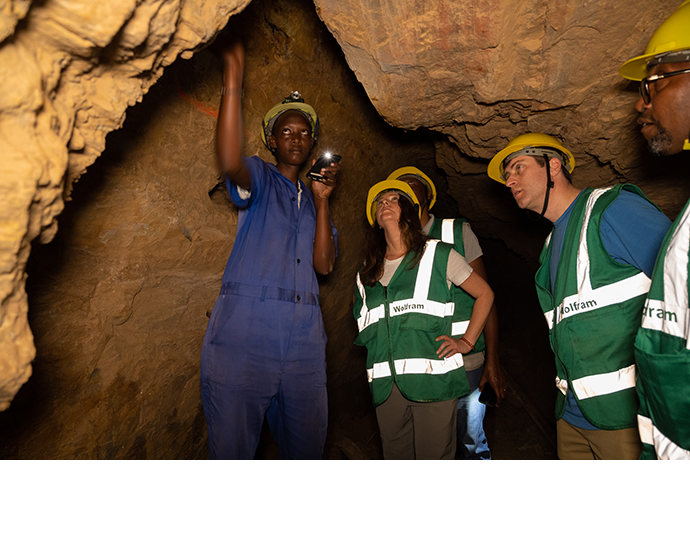 He says townspeople with picks and shovels sneak onto his company’s sprawling multi-thousand-acre mountain mining claim. In broad daylight — until they’re chased away — they dig into the mountainsides for chunks of tin ore, called cassiterite. Then they sell the ore to street buyers in the capital city of Kigali, undercutting the legal business. And who knows if that ore-on-the-street was responsibly sourced? Or if it came from rogue players?

The industry answer is a “bag-and-tag” system. Intel and other tech companies have been successfully pushing for a process that tracks bags of mineral ore with crimped-on, tamper-resistant tags. Bag-and-tag ensures that minerals come from responsible sources — in much the same way you trust that your supermarket blueberries labeled as organic are, in fact, organic. Their route from farm to shipper to market is documented and traced.

Schafer says that while mineral bag-and-tag is not a perfect system, he calls it “an important first step in diligence and transparency.” 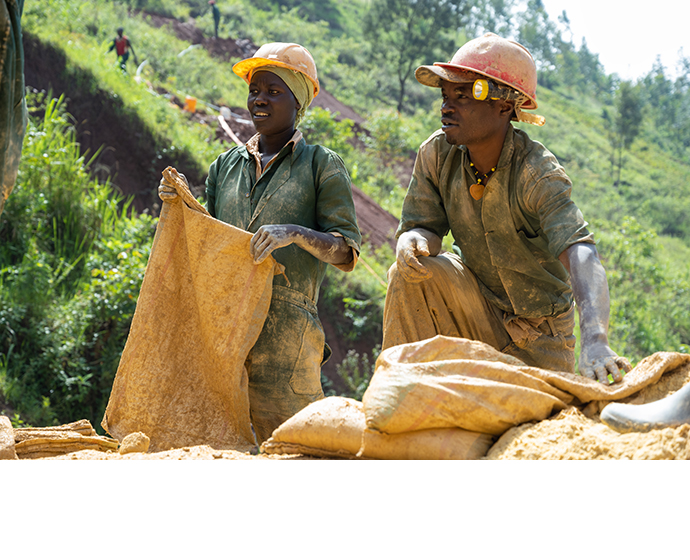 “We keep the tags locked up. And there are two locks and two keys,” Lionel Sematuro explains to Schafer and Mitchell at a mine run by Piran Rwanda Ltd.

They’re standing inside an old rust-red shipping container that serves as a depot and safe box for 220-pound plastic bags filled with Piran’s tin ore. To ensure traceability — that mineral ore has been dug legally by legit workers on the company payroll, not by unknown freelancers — each heavy bag is tagged then kept under lock and key in that shipping container.

A carefully kept logbook, filled out by hand and also locked in that same shipping container, documents all mineral movements.

Traceability “helps ensure investors that they’re not investing in unsafe or unfair practices, that they’re investing in responsibly sourced minerals, that we’re doing things correctly and by the book,” explains Ashley Dace, with Piran Rwanda Ltd.

The importance of mineral traceability extends beyond the mining process to refining and smelting, and ultimately the ready-to-market minerals that Intel and other tech firms worldwide need to buy.

In Rwanda, the Intel team talked not just with mine operators, refiners and local government leaders, but also with fellow corporate responsibility representatives in the technology industry. Accompanying the Intel team on several of the mine and government visits were reps from Apple, Facebook, Google, Nokia and other companies with whom Intel has been partnering on conflict minerals and responsible sourcing issues for nearly a decade.

Says Schafer: “It’s important that we continue to work with our peers and customers to help make our industry even better.”

For the past six years, of the more than 200 companies whose mineral sourcing programs are analyzed by the Responsible Sourcing Network, Intel has ranked No. 1.

Why does this matter? Increasingly, as Intel Corporate Responsibility director Suzanne Fallender points out, investors want to know that firms in which they stake a claim are behaving as responsible corporate citizens. Fallender told Greenbiz that investors “demand more accountability than ever, and companies have an obligation to be transparent with them.” 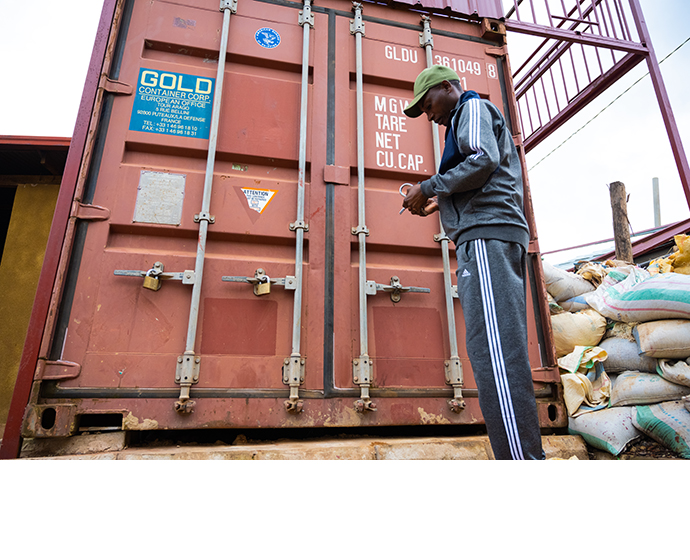 Schafer and Mitchell say their Rwandan mine inspection made clear the importance of continued mineral ore tracing. The visit — the first of its kind by Intel in seven years — signaled to local players the importance of responsible sourcing to Intel and other firms.

They also say they now recognize the industry needs a better way to account for so-called “artisanal miners” to legitimately join in the mining process. These are local citizens whose livelihood may depend on digging for minerals to sell on the open market. The challenge, says Mitchell, is “how to reduce the risk” that unfettered artisanal mining could open the door to human rights abuses – while still helping local residents to support themselves and their families.

What next? Intel is not planning to quit at the 3TG minerals. Each of these minerals occupies one of those 118 little squares on the periodic table of elements that many of us remember from high school chemistry classrooms.

Standing on that jungled mountainside in Rwanda, Schafer explains that Intel’s ambitions are much greater — they are set out in the company’s 2020 Corporate Responsibility Report and its 2030 Corporate Strategy and Goals.

“As we expand from conflict minerals to responsible sourcing, we and the industry are responsible for the entire periodic table,” he says. “Our goal is to respect all aspects of human rights, environmental impact and the people in the communities who are sourcing the materials that are critical to our industry.”